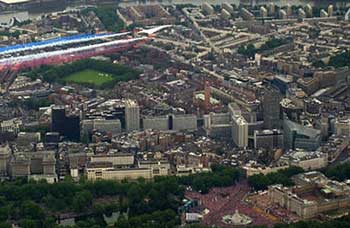 The finale of the Queen's Golden Jubilee weekend, on June 4th 2002, was a fly past that included 27 aircraft from the Royal Air Force and a Concorde from British Airways

The Flypast, which took place at 18:20, was watched by Members of the Royal Family from the balcony of Buckingham Palace, while over one million well-wishers packed the Mall and surrounding streets for one of the most passionate displays of pageantry the UK capital had ever witnessed in modern times.

The Jubilee Flypast was one of the many highlights of a day that had seen the Queen journey to St Paul's Cathedral in the Gold State Coach for a thanksgiving service. In the afternoon the Queen returned to the Mall to watch, from a specially constructed platform on the Queen Victoria Memorial, 20,000 people take part in a 50th Anniversary parade and pageant which featured people from all over the UK and the Commonwealth. 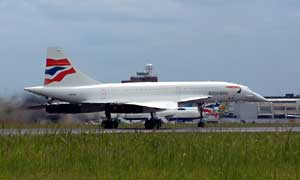 Concorde G-BOAD had several Red Day-Glow formation stickers placed on her fuselage, as can be seen in the picture, to assist the Reds in keeping in the set formation. The aircraft, which was Commanded by BA Chief Concorde Pilot Mike Bannister, meet up with the RAF Red Arrows and flew in towards the centre of London with the other aircraft in the formation. 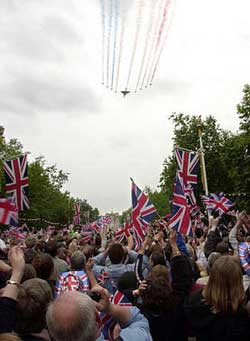 The Fly past was scheduled to be over Buckingham Palace at 17:55 but due to the scale of the events taking place had to be delayed by 30 Minutes. The Red Arrows left Stansted at 1739 to meet up with Concorde at the holding point off the Norfolk coast.

After formating over the North Sea the formations pasted over the coast line at Southwold just after 6pm and headed Overhead Ipswich, Chelmsford, Fairlop Waters Country Park and north east of Ilford before flying into Central London. At 6:25PM the flypast fleet flew down the Mall then over Buckingham Palace at a height of 1,500ft and at a speed of 280Knots.Click to see a graphic of the chart for the flight path into London and a seperate one for the flight path over London are available.
Charts are RAF - Crown Copyright

The head of the fleet, including the Globemaster, Tristar and VC10 routed back to RAF Brize Norton, with the BAE146 of the Queen's flight and BAE 125s touching down at RAF Northolt.

As soon as Concorde was clear to the flypast she climbed to 2,500ft, picked up the ILS localiser and arrived 5 minutes later at London Heathrow on Runway 27R. The Red Arrows returned to their Base at RAF Scampton, passing near to Hertford, St Neots, Thurlby, Corby Glen and Grantham.

This was the first time Concorde has been used in its flagship role since the fleet were grounded following the Paris accident in July 2000. Before the accident around 1% of Concorde flights were in that flagship role, which have included flying the England Football and European Ryder cup teams to tournaments as well as politicians to world summits.

A Concorde has flown in formation with the RAF Red Arrows on 6 previous occasions, with the last being at the Royal opening of the Scottish parliament in 1999: Concorde G-BOAE, on that occasion, had been chartered by the UK government to ferry dignitaries in style from London to Edinburgh. Since the aircraft was positioned at Edinburgh Airport, a fly past was scheduled to take place with the Red Arrows who had been booked previously. As well as flying over Edinburgh, the formation transited the 60 miles and flew over Glasgow. From more details on the previous times that Concorde has flown with the team see the Red Arrows and Concorde flight log


Picture from AP via Yahoo 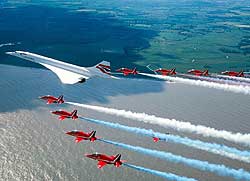 There was a rehearsal of the Jubilee Flypast on Wednesday May29th overhead RAF Marham in Norfolk. It consisted of all 27 aircraft including Concorde and the RAF Aerobatics Team - The Red Arrows. The Eurofighter was replaced by an RAF hawk trainer for the Rehearsal

The formation formed up at approximately 3.30pm off the coast of Southwold, Then ran in towards RAF Marham at a height of 1,500 feet and at a speed of 280 Kts. The first Aircraft, the C17 Globemaster, was above RAF Marham at 3.55pm, with the other aircaft taking around 10 minutes to pass.

The formation routed south of Norwich, Old Buckenham, Shropham, to the south of Watton, and south of Swaffham, adjacent to Cockley Cley and directly over RAF Marham giving the local residents and other visitors who had turned out in great numbers a chance to see the formations.

Concorde along with the Reds then headed back out over the North Sea and the Wash to complete some additional practice runs. Photographs of these runs can bee seen in the pictures that follow, which were taken by Dutch aviation photographer E.J. van Koningsveld.