A 40% scale model of Concorde in British Airways livery was situated on the roundabout at the entrance to the Heathrow terminals 1, 2 and 3 tunnel, which passes under the northern runway. 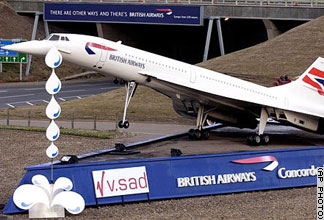 The model has the symbolic 'registration' of G-CONC.

It was build in 4 main parts; an 80ft long central fuselage section, to which the wings and tail fin were attached. It was monitored by CCTV and surrounded by an infra-red perimeter alarm, connected to the local Heathrow police station to ensure it was not vandalised, however this did not deter Richard Branson's Virgin group from talking it over.

On Concorde's final day in service fake tears were applied, along with the slogan "V Cry"

After Concorde was retired in 2003, the Slogan on the model was changed to simply say "Concorde Timeless"

" G-CONC" was placed on the roundabout in September 1990, and removed in March 2007. The cost for the prime advertising spot had risen to over £1.5M per year. At the end of their current contract BA did not feel that another 6 year deal did not suite their marketing requirements with their imminent move to the new Terminal 5.

The model was subsequently donated to Brooklands Museum, who restored the model and fully re-painted into the livery to match their own Concorde G-BBDG. In the autumn of 2012 "G-CONC" was relocated to a new permanent home as a gate guardian at the Museum's main entrance.