The Rolls-Royce/Snecma Olympus engines that are fitted to Concorde are a highly developed version of the Bristol-Siddeley Olympus that was fitted to the Vulcan bomber, which generated 11,000Lbs of thrust. Roll-Royce provided the development of the Olympus engines while SNECMA developed the exhaust and reheat system. On the prototypes this powerplant system was upgraded to generate 33,000Lbs of thrust and by the time it was fitted to the production aircraft, 38,050Lbs were available.

The Olympus engines are 2 spool engines. The inner shaft revolves within the outer shaft. The engine consists of 14 compressor stages, 7 on each shaft, driven by their respective turbine systems. At supersonic speeds when the air approaches the combustion chamber is is very hot due to the high level of compression of 80:1.

The darker (black areas) are the areas more susceptible to heat and are thus constructed out of the nickel-alloy.

To protect the later compression stages the last 4 stages are constructed of a nickel-bassed alloy, the nickel alloy is usually reserved only for the turbine area. The speed or RPM of the engine's outer shaft is controlled by the amount of fuel being burnt. By varying the surface area of the primary nozzel, the inner shaft RPM on the inner shaft can be controlled relative to the outer shaft RMP

Concorde is the only civil airliner in service with a 'military style' afterburner system installed to produce more power at key stages of the flight. The reheat system, as it is officially known, injects fuel into the exhaust, and provides 6,000Lb of the total available thrust per engine at take off. This hotter faster exhaust that is used on take off and is what is mainly responsible for the additional noise that Concorde makes. The reheats are turned off shortly after take off when Concorde reaches the noise abatement area. 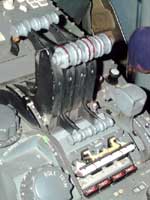 The reheats are turned back on, by the piano switches behind the thrust leavers, for around 10 minutes once the aircraft is clear of land, to push the aircraft through Mach1 and on to Mach1.7 where they are no longer required. 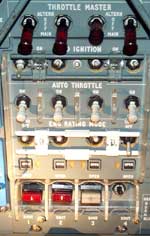 The Aircraft has an electrically controlled throttle system that is used to control the power delivered from the engines. Moving the throttle leavers asks the computer to apply the power to the engines in a correct and controlled manner. Through throttle master controls on the overhead panel, each engine can be either connected to the throttle lever (main) to an alternate controller or not controlled at all.

The engines also have ratings where they can be selected to different power or rating settings for different parts of the flight. eg take off or cruise. A contingency setting is available for use during engine failure and more power that normal is required from the remaining engines

There are two auto-throttles systems fitted to the aircraft that are associated with the autopilot systems. Each engine can be manually disconnected from the auto-throttle system if required. The Autopilot and auto throttle system will be described in another section of the site.

At take off the engines need maximum airflow, therefore the ramps are fully retracted and the auxiliary inlet vane is wide open. This vane is held open aerodynamically. The auxiliary inlet begins to close as the Mach number builds and it completely closed by the time the aircraft reaches Mach 0.93.

Shortly after take off the aircraft enters the noise abatement procedure where the re-heats are turned off and the power is reduced. The secondarry nozzles are opened further to allow more air to enter, therefore quietening down the exhaust. The Secondary air doors also open at this stage to allow air to by pass the engine.

At slow speeds all the air into the engine is primary airflow and the secondary air doors are kept closed. Keeping them closed also prevents the engine ingesting any of its own exhaust gas. At around Mach 0.55 the Secondary exhaust buckets begin to open as a function of Mach number to be fully open when the aircraft is at M1.1

The ramps begin move into position at mach 1.3 which shock wave start to form on the intakes.

At take off and during subsonic flight, 82% of the thrust is developed by the engine alone with 6% from the nozzles and 21% from the intakes

At the supersonic cruse speed of mach 2.0 the ramps have moved over half their amount of available travel, slowing down the air by producing a supersonic shockwave (yellow lines) at the engine intake lip.

When the throttles are brought back to start the decent the spill door is opened to dump out excess air that is no longer needed by the engine, this allows the ramp to go down to their maximum level of travel. As the speed is lowered the spill doors are closed and the ramps begin to move back so by M1.3 are again fully retracted.

The ramps can continue in operation till Mach 0.7, should an engine have had to have been shut down.

During the Supersonic cruse only 8% of the power is derived by the engine with the other 29% being from Nozzles and an impressive 63% from the intakes.

Should an engine fail and need to be shut down during supersonic cruise, the ramps move fully down and the spill door opens to dump out exess air that is no longer required by the failed engine. The procedure lessens the chances of surges on the engine.

After touch down the engines move to reverse power mode. The main effect of this is that the secondarry nozzle buckets move to the closed position directing airflow forwards to slow the aircraft down.

Although the same as all the other 3 engines, the starboard outer engine needs to be treated in a different manner at slow airspeeds compared to the other 3. In fact the procedures related to what is done were not fully developed until Concorde was just going into passenger service in January 1976.

The main issue is that at slow airspeeds the engine suffers vibrations on the low pressure compressor blades from air vortices, that are created by the wing leading edge sections, entering it from both the air intake and fully open AUX inlet door that moving in an anti-clockwise direction, which is the opposite direction to the engine's direction of rotation. The effect is not seen on engine No1, as the vortices travel in the same direction as the aircraft.

2 solutions were adopted to smooth the airflow reaching the engine:

The No4 engine is limited on take off to 88% N1 at speeds below 60 Knots. A solenoid latched switch on the Flight engineers panel accomplished this task, and is automatically released by a signal from the Air Data Computer to enable the N1 to rise back to the normal 97-99% level when the aircraft is above the 60knot threshold.

For air entering via the AUX inlet vane a remedy was found that to limited the opening of this vane by about 4 degrees, compared to the other 3 engines, reduced the buffeting to a tolerable level.

If you stand underneath or behind Concorde during take off (with your Fingers in your ears!) look and it can be clearly seen that the no4 AUX inlet vane is not as open as the other three. The reheat flame on engine 4 is also not as bright or stable as the other three during the initial take off roll, until the aircraft is around 60knts when it matches the others.