Concorde to fly past for Queen's Golden Jubilee - May 2002 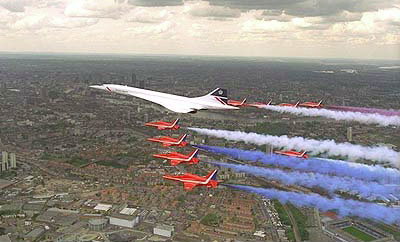 According to the Official Website for the Queen's Golden Jubilee celebrations; the finale of the Golden Jubilee weekend will be a fly past that includes aircraft from the Royal Air Force and Concorde.

The Flypast is scheduled to take place on Tuesday June 4th, with the actual fly past scheduled for 17:55. Members of the Royal Family will watch it from the balcony of Buckingham Palace, while many thousands will be lining the streets around the area. It is expected that Concorde will fly in formation with the RAF aerobatics team - The Red Arrows.

The current formation of aircraft in the flypast from the Golden Jubile website is as follows:


There will be a rehearsal of HM The Queen's Golden Jubilee Flypast. The rehearsal will take place overhead RAF Marham in Norfolk, and consist of up to 27 aircraft including Concorde and the RAF Aerobatics Team the Red Arrows.

The formation will form up at approximately 3.30pm off the coast of Southwold. Then run in towards RAF Marham at a height of 1,500 feet and a speed of 280 Kts to be overhead RAF Marham at 3.55pm.

The formation will route south of Norwich, Old Buckenham, Shropham, to the south of Watton, and south of Swaffham, adjacent to Cockley Cley and directly over RAF Marham. This will be an ideal opportunity for local people and visitors under the route to have a close look at the formation, in advance of its appearence in London on June 4th. Should the weather be bad on the 29th, Thurs 30th and Fri 31st are set aside as standby dates.

This will be the first time Concorde has been used in its flagship role since the fleet were grounded following the Paris accident in July 2000. Before the accident around 1% of Concorde flights were in that flagship role, which have included flying the England Football and European Ryder cup teams to tournaments as well as politicians to world summits

A Concorde has flown in formation with the RAF Red Arrows on 6 previous occasions, with the last being at the Royal opening of the Scottish parliament in 1999: Concorde G-BOAE, on that occasion, had been chartered by the UK government to ferry dignitaries in style from London to Edinburgh. Since the aircraft was positioned at Edinburgh Airport, a fly past was scheduled to take place with the Red Arrows who had been booked previously. As well as flying over Edinburgh, the formation transited the 60 miles and flew over Glasgow.

GO BACK TO ARCHIVE INDEX