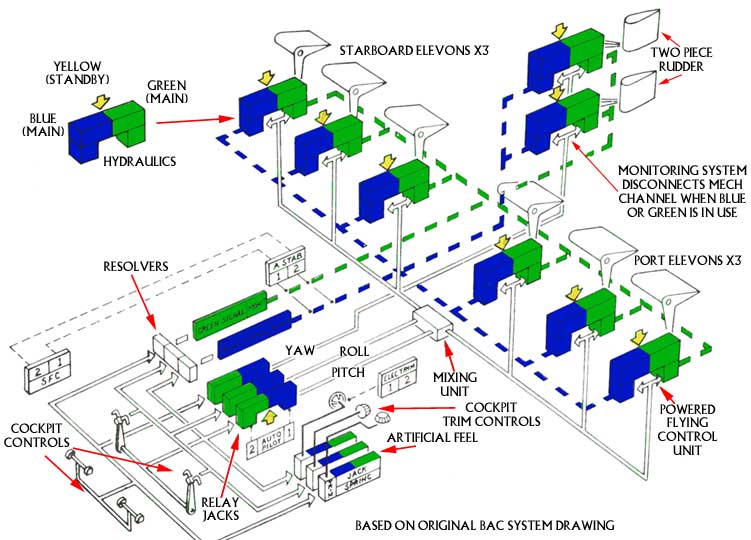 Concorde was one of the first fly-by-wire aircraft in the world. With fly-by-wire, the aircraft is controlled by means of electrical signals that are sent to the hydraulically actuated flight controls which consist of:

Each of these eight flight control surfaces is independently controlled by a Powered Flying Control Unit (PFCU). The PFCU is actuated by an electro-hydraulic twin-ram servo system with either the blue or green or the yellow standby hydraulics powering either of the rams.

The PFCU's (show above) end stops allow the inner elevons a9 degrees of travel up or down and the outer/middle elevons can travel 23.5 degrees up or down. The end stops on the rudder allow a travel range of 30 degrees in either direction. ThThe actual travel limits, that are controlled by the fly-by-wire mixing unit, are a little less that these mechanical maximums. 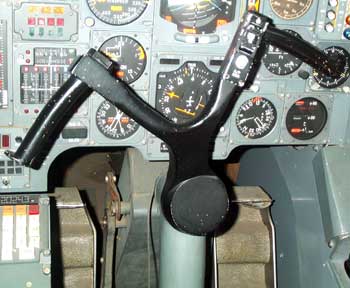 Conventional flight deck controls (yoke, pedals and trim controls) send signals to 2 electrical channels (Green and Blue), and via relay jacks to a 3rd standby mechanical channel. As fly-by-wire was still in its infancy in the 70's, a mechanical system was still the order of the day, unlike in today's Airbus aircraft where the whole system is electrical. In Concorde, the mechanical system is not as a matter of course connected to the PFCUs, but is automatically connected should a double failure occur in the green or blue electrical systems.

Inputs from the flight controls are converted to electrical signals by way of resolvers that directly control the PFCUs. In the mechanical channel, the pitch and roll commands are mixed by a mechanical mixing unit. 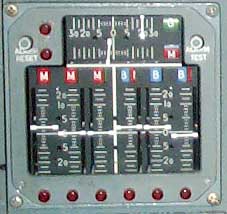 When the autopilot is in operation, roll, pitch and yaw are directly controlled by the autopilot computers. The relay jacks provide an input to the system from the autopilot and also provide feedback to the flight deck controls.

An artificial feel system that makes the aircraft feel to the pilot like a conventionally controlled aircraft is also fitted. The system increases the cockpit control stiffness, through jack springs, as a function of the speed of the aircraft. On a traditionally controlled aircraft the controls would be harder to operate when the deflection of the control surfaces is increased at high speeds due to air resistance. On Concorde, the artificial feel system re-instates this resistance into the controls to make the aircraft handle as a traditional aircraft would, as otherwise the flight control would just move to where they were sent, with very little effort by the pilot, making it very easy to over-control the aircraft.

Two auto-stabilization systems (main and spare) feed to the flight control surfaces. This improves the stability of the aircraft during flight and helps minimise the effects of any turbulence that could be encountered. The systems also aid in controlling the aircraft should it suffer an engine failure. The signals from the autostab computers (unlike those from the autopilots) are sent directly to the PFCUs and no feedback is provided to the pilots controls.

For the case where the cockpit flight controls become jammed between the control columns and the relay jacks, an emergency control system is fitted that, with the aid of strain gauges, measures the forces being applied to the controls by the pilot against the jam and sends the resulting signal directly into the electrical flight control channels.