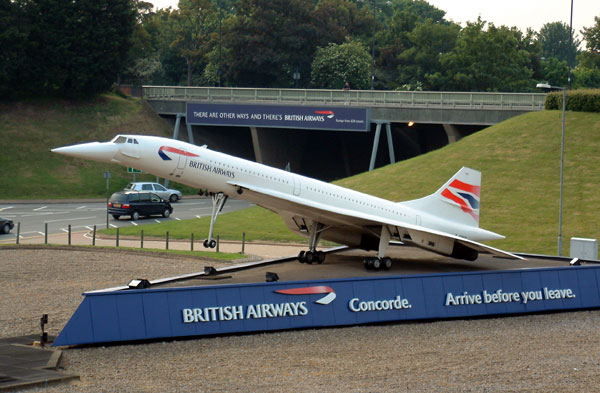 After nearly 17 of tenure as the ultimate airport gate guardian, the Heathrow Airport scale Concorde model is set to be removed and shipped to a new display home in Weybridge, the former headquarters of the British Aircraft Corporation.

British Airways’ lease on the prime Heathrow advertising spot expires on March 31st 2007. With the airline set to quit the main central terminal areas next spring, a new multi-year lease for the site, reputed to cost £1.5M annually, did not fit in with their marketing plans.

A BA spokesman said: “ We took the decision last year not to renew the advertising contract for the space on the roundabout.

“ The decision took into account the substantial leasing cost for the site and the fact that we will be moving to Terminal Five in March 2008, which is at the western end of the airport, more than two miles from the roundabout.

“ Concorde ceased flying more than three years ago. It remains and important part of the airliners history, but we must focus on the future. We must also focus on spending our marketing budget as efficiently as possible.

Emirates are reported set to take over the spot, sub-leased by advertising giant JCDecaux, in a new 6 year deal that will see a model of their flagship Airbus A380 on the site, until after London has hosted the 2012 Olympic Games.

The 80ft long 40% scale Concorde model will dismantled by a team of experts on March 29th and turned over to the guardianship of Brooklands Museum on the 30th. The museum hope to temporarily rebuild the model on their museum site as part of their Centenary celebrations in the summer, before its moved to prime spot in the local vicinity where it will serve not only as an ongoing advertisement for British Airways and Brooklands, but as a tribute to the thousands of local people who worked in the BAC factories at Weybridge.

Allan Winn, Director of Brooklands Museum said “ Concorde is an international icon that has close associations with Weybridge, Byfleet and the surrounding area. Prominently displaying it in a public location near to the museum will mean a great deal to the generations whose family members worked in the giant aircraft factory at Brooklands, as powerfully drawing attention to what we have here.”