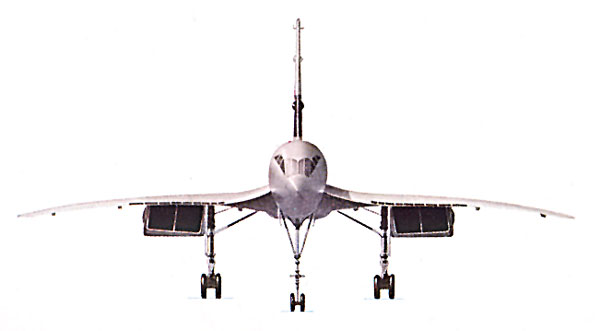 The "slender delta" wing on Concorde has the appearance of total simplicity. In spite of this, there was probably no one area on the aircraft where more attention was payed to its design and construction.

On the wing of a traditional subsonic aircraft there may be well over 50 moveable devices, including those for control and trim of the aircraft and the often complex flaps and leading edge slats for the generation of additional lift at slower speeds.
Concorde has none of this; in fact the Concorde delta wing only has 6 trailing edge "elevons" that replace the traditional elevators and ailerons that allow control of both pitch and roll of the aircraft.

As aircraft speeds have increase over time, the amount of "sweepback" that can be seen on the wings has also increased. The slender delta that features on Concorde takes this one step further. Looking head-on at the Concorde wing, it does not just sweep back (by 55 degrees) but it twists and droops, making what appears to be a very simple design in reality very complex.

It is the intricacies of this design that allows Concorde to generate sufficient lift at low speeds by increasing the angle of attack of the wing, but also to perform very efficiently at high speeds as it generates very little drag.

On a traditional aircraft's wing a swirling vortex is formed only at the wing tips. On a delta wing at low speeds, such a vortex is formed nearly enough along the entire wing surface and produces most of the lift in those conditions.

With Concorde's high angle of attack at low speeds the amount of vortex lift that is generated by the wing increases significantly, and this is fundamental for Concorde to be able to fly at slow speeds during take off and landing. 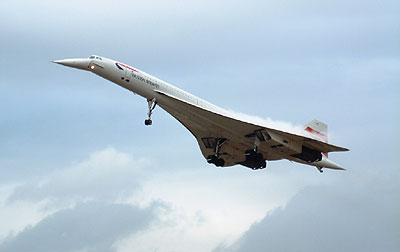 This is best illustrated on a damp day when the vortex can be seen to fully envelop the upper surface of the wing, when the aircraft is flying at slow speeds and at a high angle of attack. The picture opposite shows the way the vortex forms above the wing and causes the water vapour in the air to condense, due to the reduction of pressure.

The final benefit of the large delta shape is the ground effect that is created when the aircraft comes in to land. As the aircraft gets closer to the ground, the downwash of the air between the wing and the ground creates a cushion. Due to this air cushion, a landing on Concorde will tend to be very smooth even though it is at a much higher speed.

The Concorde wing is the best compromise between a wing that provides sufficient lift at low speeds but also has the right profile for flying at supersonic speeds. The supersonic cruise demands a long chord, relatively slight thickness and short wingspan, that provide a great deal of lift in the high speed domain with very little drag.

During the design of the wing, over 5000 hours of wing tunnel testing were carried out to modify its camber, droop and twist, to ensure that the vortex that would be formed along the wing would be stable at high angles of attack.

Strength and weight were also very important in the design and construction of the wing. Instead of bolting and riveting sections together, as had been done in the past, engineers used a process called sculpture milling that starts off with a solid piece of metal. They then used a numerically controlled milling machine to carve out the required shapes. The material used was copper based aluminium alloy, known as RR58 in the UK and AU2GN in France.

The use of this process meant the parts could be made to much closer tolerances, and also be much stronger as there are no welds or rivet joints which could be a possible source of weakness. More importantly, several hundred pounds in weight were saved with no compromise in strength.